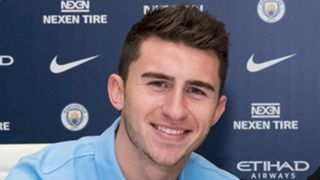 Manchester City must be patient with club-record signing Aymeric Laporte, according to Pep Guardiola, who believes the defender is ready for immediate first-team action.

Laporte's €65million Athletic Bilbao release clause was met by the Premier League leaders, the centre-back's arrival narrowly eclipsing the £55m they paid to sign Kevin De Bruyne from Wolfsburg in 2015.

The uncapped Frenchman signed a contract to 2023 on his Etihad Stadium arrival and Guardiola believes 222 appearances at Athletic will stand Laporte in good stead as he tackles the Premier League.

"He's played since a young age in LaLiga so he is at a high level," Guardiola told a news conference on Tuesday.

"He's strong in the air and fast. He's got good quality and we are delighted.

"Because he's been playing for the last period, he's ready. He has to adapt and the Premier League is special in many senses but he's intelligent and will read situations.

"Even for English players the Premier League is a little bit tough, we will be patient. He comes for five years, so that's what it is."

Laporte was a reported target of Guardiola's immediately after the Catalan's Manchester City appointment in 2016, but he had to wait 18 months to get his man after the defender opted to stay at Athletic to recover from an ankle injury.

"The clubs have interest in players but they also have to want to come to the club," Guardiola said.

"We are very aware of his skills, he's an experienced central defender on the big stages and has the skills to help us. He is the perfect age to be with us for a while."

With Laporte's arrival set to see Eliaquim Mangala pushed down City's defensive pecking order, the centre-back has been linked with a loan move to Newcastle United.

But Guardiola said the 26-year-old would be staying at City to provide cover over the second half of the season, with the transfer window set to close on Wednesday, although Tosin Adarabioyo could depart on a temporary basis.

"Tos has to play," Guardiola said. "He played in the EFL Cup, Leicester away, and controlling the strikers he was really good but he hasn't the minutes he needs.

"It's the same [with Mangala] and he will help us with this season. I have no doubts. Defensively he is a top, top, top, top player.

"Laporte adds something special with the ball but we cannot forget how important Mangala is. He played because [Vincent] Kompany and [John] Stones were out and he helped us a lot.