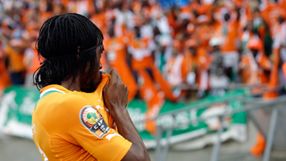 Gervinho swept in a Yaya Toure free-kick from a tight angle in the 88th minute to snatch victory in the Group D opener at the Royal Bafokeng Sports Palace as the Ivorians began their latest attempt to win the championsip for the first time since 1992.

The match seemed destined to become the sixth of the seven played so far at the Africa Cup of Nations to finish all square before Gervinho's precious late winner.

Both teams had chances to win the game after Yaya Toure put Ivory Coast ahead in the eighth minute and Jonathan Ayite scored Togo's equaliser just before half-time.

That was the first goal the Ivorians had conceded in the finals since 2010 after keeping a clean sheet in every match last year when they drew the final 0-0 with Zambia then lost on penalties.

"We did not play at our best and made some mistakes, but the three points are what mattered and I am very happy about that," said Ivory Coast's French coach Sabri Lamouchi.

Despite the allure of some of African football's top names and the glorious sunshine the stadium was sparsely populated with easily the lowest attendance of the tournament so far.

Those that did turn up almost saw a goal soon after kick-off when Togo talisman Emmanuel Adebayor stole the ball from his former Manchester City team mate Kolo Toure on the edge of the penalty area.

Adebayor seemed certain to score from close range with only Ivory Coast keeper Boubacar Barry to beat but he inexplicably decided to round the keeper instead of shoot when he had the chance and he lost control of the ball.

"It's true I had a chance and maybe I should have been a little more decisive, but that's how it goes in football sometimes," said Adebayor.

"I thought Ivory Coast played well but perhaps we play a little too nervously against the big teams."

Yaya Toure was far more emphatic when his chance came in the eighth minute following good work by Gervinho on the right wing, who managed to evade two defenders before cutting the ball back.

Toure's powerful shot took a deflection on its way past Togo keeper Kossi Agassa and he almost scored a second in the opening half, hitting a post with a rising shot after 44 minutes.

The Ivorians largely controlled the match for the rest of the half by forcing Togo to defend deeply but their opponents were never out of contention, especially when Serge Gapke had the ball.

After setting up several chances, fittingly it was Gapke who took the corner that led to the equaliser just before the break when the Ivory Coast defenders failed to deal with his cross which Jonathan Ayite hooked home.

Togo thought they had scored a second after half-time when Dare Nibombe headed home from a corner, but the referee had not yet blown for the corner to be taken while a substitution was taking place and disallowed the goal.

It seemed an obvious decision but it infuriated Togo coach Didier Six.

"My team deserved better than that. The rules were not respected," Six