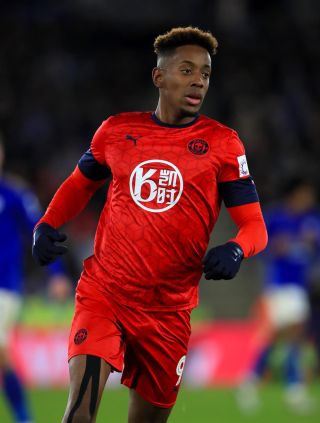 Wigan, boosted by the inclusion of England Under-18 skipper Joe Gelhardt for his full debut, flew out of the traps and bossed the early stages.

But, and not for the first time this season, they failed to translate that into much in the way of meaningful efforts on goal.

A good move involving Antonee Robinson and Lee Evans seemed to play in Lowe, but the former Portsmouth man did not read the opening quickly enough.

Gelhardt then worked a good opportunity for Robinson, but the United States international’s shot was way off target.

Wigan were screaming for a penalty when Gelhardt glided past three defenders before being felled on the edge of the area – fairly in the eyes of referee David Webb.

The home side dodged a bullet on the half-hour mark when a mix-up between Evans and Kal Naismith allowed Jacob Murphy to pounce.

Murphy nutmegged Naismith before advancing on goal, only to pull his shot wide of the far post.

However, Wigan did not heed the warning, and Wednesday did go in front a minute later.

Again it was Murphy involved, the forward pulling away from the home defence to power home a bullet header from Morgan Fox’s left-wing cross.

Wednesday were almost in again moments later, Fox again with a cross, but this time no attacker could get on the end of it.

Sam Morsy’s 35-yard effort was the only thing Wigan could offer in reply, with Owls goalkeeper Cameron Dawson equal to it.

The Wigan skipper then saw a left-footed effort deflected just wide shortly after the restart, before the equaliser did arrive in the 56th minute.

Again Morsy was involved, threading through a wonderful pass for Kieffer Moore to provide the cool finish.

Wigan then saw Kieran Dowell stretchered from the field, with Gelhardt also departing, and Michael Jacobs and Joe Williams taking over.

Jacobs was straight into the action, sending over a cross that was just in front of Moore, before testing Dawson from 12 yards.

But Wigan were not to be denied and forced a winner on the 90-minute mark thanks to a predatory header from Lowe, after Joe Garner had flicked the ball on in the box.

Even there there was almost a sting in the tale, with a routine ball into the Wigan box – with all six added minutes up – found a Wednesday man.

But with the whole of the goal to aim at, substitute Jordan Rhodes steered his effort straight at David Marshall – to the relief of most inside the DW.