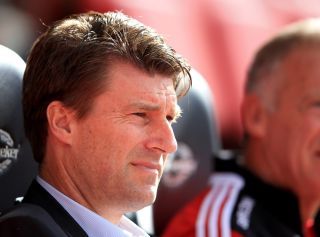 The London club parted ways with interim manager Rafael Benitez at the end of the previous campaign and replaced him with Jose Mourinho, who returned from Real Madrid for a second spell in charge at Stamford Bridge.

However, Laudrup has revealed that Chelsea did begin informal talks with him about the role after he led Swansea to League Cup glory in an impressive first season in the Premier League.

"Someone tried to know my availability through intermediaries, but there was nothing concrete," the Dane told A Bola.

"Also, I had given my word that I would be in Swansea."

There were rumours swirling around the Liberty Stadium that Laudrup may be on his way out in the close-season after Swansea reportedly had a disagreement with his agent Bayram Tutumlu.

The 49-year-old remained at the club, but has seen his side win just two of their seven Premier League games this term.

However, they have fared better in the UEFA Europa League, winning both their opening group fixtures against Valencia and St Gallen respectively.