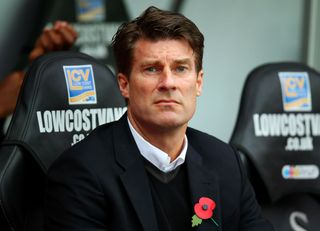 The Welsh outfit were held by Sam Allardyce's side at the Liberty Stadium on Sunday, with the visitors spurning a host of first-half chances.

But Swansea improved after the break and substitute Wilfried Bony almost broke the deadlock when he forced West Ham goalkeeper Jussi Jaaskelainen into a superb reflex save from six yards.

The hosts felt they should have had a penalty in injury time when Nathan Dyer's cross appeared to strike Joe Cole high up on the arm, and Laudrup was adamant the spot-kick should have been given.

"I always say the linesman and referee only have one second (to make a decision), but it's so clear when the hand is up like that," Laudrup said.

"If you have the arm down, you can talk about hand to ball or ball to hand, but up there if it touches you, nine times out of 10 it is given.

"We know that the relationship between Swansea and penalties (awarded) is not the best, even if we got one last weekend after 50 something games.

"I think in this case the linesman was in the perfect position. They said it was not deliberate, of course it's not, no one wants to take the ball with his hand."

Laudrup was also frustrated with his side's inability to break down a West Ham side that started the match without a recognised striker, and felt Jaaskelainen was the key reason for West Ham earning a point.

But he did admit that West Ham caused his team trouble at set-pieces.

"I think we deserved more, on the other hand, Jaaskelainen had made two or three fantastic saves. You can't really do anything about that," he added.

"I knew it would be very difficult because they had huge success playing like this against Tottenham winning 3-0.

"We knew they would play without a striker (and) with six in midfield, (and) then (Ravel) Morrison, (Stewart) Downing and Ricardo Vaz Te moving up there.

"It's difficult when it's 0-0 and a team like West Ham are so good at set-pieces. They have the corners, the throw-ins and the free-kicks. They caused us problems (when) they had four or five consecutively in the first half."