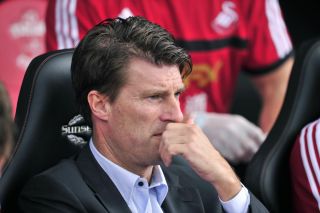 The hosts started the match well and made the most of their early superiority when Adam Lallana gave them a 19th-minute lead, but Swansea soon grew into the match and forced Artur Boruc into a string of saves.

However, they were made to pay for not taking their chances after the break as, following a disallowed Victor Wanyama strike, substitute Jay Rodriguez completed the win.

Laudrup said: "Southampton dominated for the first 20 minutes, but we were the better team after that. We dominated.

"Their keeper (Boruc) made three great saves and we hit the post.

"Sometimes we need five or six chances to score a goal and we need to make that percentage a little higher."

Alongside their Premier League campaign, Swansea are also competing in the UEFA Europa League - having claimed a 1-0 win over St Gallen on Thursday - but Laudrup was adamant that fatigue was not an issue.

He added: "Today was our seventh game in 20 days and I thought there could be some players tired, but I didn't see that."