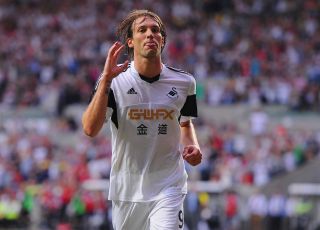 Laudrup and Michu both extended their contracts at Swansea last term, with the former agreeing a new one-year deal in March.

Michu, who proved to be one of the bargain buys of the 2012-13 season, scored 18 goals in 35 Premier League appearances for Swansea last term and signed a four-year extension in January.

Arsenal are reported to be keen admirers of Michu and, having been frustrated in their attempts to strengthen in the close-season, speculation has intensified regarding their interest in the 27-year-old.

But Laudrup is confident that Michu will be staying put.

"I think economically the club is very good," Laudrup said.

"I know if they (Arsenal) came in with a very late bid, I know that the reaction from the board and chairman will be, 'No'.

"Even if the money is ridiculous, as we will not have time enough to find a replacement who is near enough to the same standard.

"You can say we would get a lot of money, but why be the richest club in the Championship? What is that worth?

"I spoke to Michu last year and he extended his contract and asked me about mine and I said, 'I am going to stay here,' and he said, 'So am I'."

Michu will get support from new Swansea signing Wilfried Bony up front in the 2013-14 campaign, with the Ivorian impressing in pre-season after completing a club-record £12million transfer from Vitesse Arnhem.

Swansea, who will take on Petrolul Ploiesti of Romania over two legs in their UEFA Europa League play-off, open their Premier League season against champions Manchester United on Saturday.