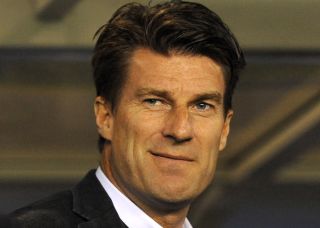 The Liberty Stadium side picked up their first home victory since March with a 4-0 triumph on Saturday - their first win over the Wearsiders since 1982.

After a resolute defensive display by Sunderland in the first half, Phil Bardsley's own goal in the 57th minute was soon followed by a superb Jonathan de Guzman finish and a Wilfried Bony spot-kick after the break in a nightmare seven minutes for the visitors.

Chico Flores' header was diverted into his own net by Steven Fletcher for a fourth, and Laudrup was happy at continued signs of progress.

"We've done well," said the Swansea boss. "But it's true that this was the first win at home in the league this season.

"But when people start to talk about things like that, it's better to turn it down immediately, and the only way you can do that in this case is by winning.

"For me, it was a great win because it was a very difficult game.

"The first half was very, very difficult. To be fair, we didn't make it easy for ourselves in the way we played. There was not enough movement, we weren't quick enough and we didn't move the ball around as fast as we could.

"As a team we did not perform that well in the first half, but I knew that the players really wanted to win this game and we tried to change some things at half-time, and I think it changed completely. It always helps to score a goal."

Laudrup also paid tribute to Sunderland, and admitted that he was expecting it to be a tough clash.

"Credit to Sunderland," he added. "I knew it would be difficult. (They had a) new manager (Gus Poyet), everybody wanted to please him and to give him a very good impression so they could be in the starting XI from now on."