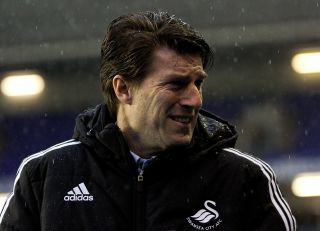 Swansea are without a win in eight top-flight outings, but progressed to the fifth round of the cup after coming from behind to beat their Championship opponents on Saturday.

Lee Novak put the hosts ahead after 15 minutes, but Swansea's record signing Wilfried Bony came off the bench at half-time and scored twice in two minutes midway through the second half to see his side safely through to the last 16.

And after the game, Laudrup said the result would have a positive effect on his side's morale.

"A win is always good for confidence," he said.

"Especially in the situation we are in. The reaction was pleasing as well. The first half was very difficult, we lacked a lot of confidence.

"We really wanted to win, but sometimes you play a bit too nervously. We saw a much more relaxed team in the second half, created a lot of chances and scored two goals. We started to play with confidence again."

Laudrup went on to heap praise on the impact of Bony, who scored his 14th and 15th goals of the season to earn his side victory.

"With the way they (Birmingham) played, we had to start Bony from the second half, and it paid off," he said.

"He has had to adapt to a different culture on and off the pitch. It is always difficult when you are a foreigner.

"Now that he has adapted, he is playing with a lot more confidence. The first was a great goal and the second, he wouldn't have scored if he didn't have confidence.

"I am happy for him and the team. Hopefully we can build on this result today."