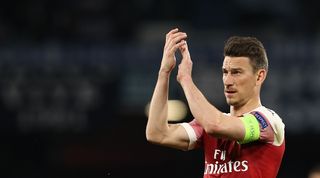 The Frenchman left his homeland in 2010 when he joined the Gunners from Lorient.

However, his future is now in doubt with Bordeaux making his signing a priority this summer.

Manager Paulo Sousa wants to add some experience to his backline after last term's bottom-half finish.

Koscielny is said to be interested in Bordeaux's project and could ask Arsenal to leave a year before his contract expires.

Project Youth 2.0: Why Arsenal's problems can be solved from within