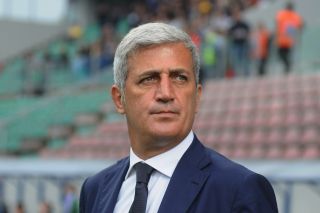 Although Lazio had only lost once in that five-match streak, a 2-1 defeat against Atalanta, the Bosnian knows the three points will lift the mood at the club.

Second-half goals from Miroslav Klose and Andrea Candreva secured the three points against Cagliari on Sunday, but the club's fans had expressed their frustrations up until the deadlock was broken in the 52nd minute.

Petkovic acknowledged there had been speculation about his future, but insisted he had not had any discussions with the club's owners and always had faith in his ability.

"If Lazio had lost (against Cagliari), it would certainly have been a very different debate," he told Sky Sport Italia.

"There is some positivity now, but we're aware of the pressure coming from the outside.

"We heard the jeers when we started to make some mistakes and felt the pressure psychologically, but I must compliment the lads for keeping calm till the very end.

"I told the players at half-time to enjoy their football and get back to having fun with the sport.

"I had no signs from the club suggesting I would be in trouble if we failed to win. We were relaxed in the second half, believed in what we had to do and in the end achieved it."

The victory moved Lazio up to seventh in Serie A, but they are already 13 points behind leaders – and fierce rivals – Roma, who have won all nine league matches this season.