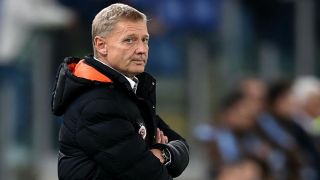 Sparta Prague coach Zdenek Scasny labelled their Europa League last-16 triumph over Lazio as the greatest achievement of his career.

The Czech side produced a stunning first-half display in the second leg at the Stadio Olimpico, with goals from Borek Dockal, Ladislav Krejci and Lukas Julis putting the tie beyond doubt as Sparta prevailed 3-0 to claim a 4-1 aggregate win.

Victory for Sparta marked their first in Italy having failed to win in the country on 11 previous attempts and ensured they reached the last eight of a major European tournament for the first time since 1993.

Asked if the win was the finest moment of his career, Scasny responded: "At the moment, definitely yes.

"[My] feelings are simply wonderful. The players won the game with their performance. But I think that tactics played a role.

"With time, I believed more and more, because we really played very well."

Next up for Sparta, who are second in the Czech Liga table, is a derby with city rivals Slavia Prague.

Scasny was also asked if the result means his team have nobody to fear in the competition, replying: "It would be bold to say that we need not be afraid of anyone. In football many things can happen.

"To be honest, I'm more interested in estimating our chances in Sunday's derby."