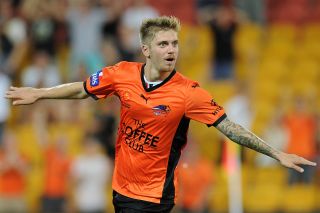 The midfielder scored with a long-range piledriver with three minutes remaining to complete an impressive turnaround from Brisbane.

Teenage home debutant Devante Clut had earlier equalised with a brilliant strike of his own, following a first -half goal from Stein Huysegems that was a just reward for Wellington's strong showing early in the match.

The Phoenix came into the game with a record of five losses and a draw in their previous six encounters with the Roar but did not look overawed in the slightest as they bossed proceedings from kick-off.

For much of the first half, Phoenix held a rigid formation in defence to stifle Brisbane's attacking threat, and they looked dangerous themselves when breaking forward.

Following Huysegems' 36th-minute goal, however, the home side began to turn things around and find ways through a previously impenetrable Wellington backline.

After Dimitri Petratos had tried a long-range effort that was parried by Glen Moss, Brazilian Henrique then missed an absolute sitter when he failed to turn in a low Jack Hingert cross at the near post.

Thomas Broich then fired a shot against the crossbar before Clut marked his debut with a spectacular goal five minutes after the break, as Broich's cross was laid on by Henrique with his chest and the teenager took one touch before rifling the ball into the top corner.

The Roar hit the woodwork for a second time from a corner when Henrique tried an overhead kick in a crowded area and his shot was deflected onto the crossbar.

But Brattan's superb winner with three minutes left proved to be decisive, as the midfielder rifled home with the help of a slight deflection off the boot of the unfortunate Vince Lia.