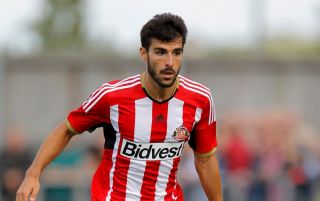 The Premier League side, beaten finalists in this competition last season, were given a tough examination at St Andrew's on Wednesday by the hosts, who will be aggrieved by a 3-0 scoreline that does not reflect how close the second-round tie was.

Jordi Gomez struck with a dipping 25-yard drive to break the deadlock after 77 minutes, his first goal since joining from Wigan Athletic in the close-season, before Adam Johnson and Connor Wickham both found the net.

David Cotterill had earlier hit the post and Paul Caddis forced a save from Costel Pantilimon as Birmingham made a game of it.

The result means that Sunderland make it to round three for the sixth time in the last seven years.

In a first half of few chances, an early Caddis shot forced Pantilimon to palm the ball out for a corner, while for the visitors, Jozy Altidore volleyed a Sebastian Larsson cross over.

The home side continued to edge a tight game as Mark Duffy found Clayton Donaldson in the area, but the striker could not get his shot away from close range. Cotterill then rifled against the post towards the end of the half, but it was ruled offside for the 2011 League Cup winners, who ended the half strongly.

Both sides have experienced highs in the competition in recent years, but it was the Championship side who showed more endeavour early in the second period. Wes Thomas looked lively but overhit two crosses before substitute Lee Novak fired over just after his introduction on the hour mark.

But Sunderland were almost gifted an opener when Birmingham goalkeeper Colin Doyle flapped at a corner before redeeming himself with two close-range saves as the hosts survived.

Doyle was busy again midway through the second half when Liam Bridcutt picked up a loose ball after Gomez's free-kick was blocked, but he saved well.

It was Birmingham's turn to strike from range when David Edgar picked the ball up, but Pantilimon got to his left to make the save.

However, Sunderland showed their class with 13 minutes remaining through Gomez, who rifled in an unstoppable effort from 25 yards out into the bottom corner to give Doyle no chance.

And, as the home side pressed for an equaliser, Sunderland broke forward and hit Birmingham twice on the break.

First, Johnson tucked away the rebound as Altidore's shot was saved three minutes from time. And Wickham added gloss to the scoreline when he poked past the Birmingham goalkeeper a minute later.