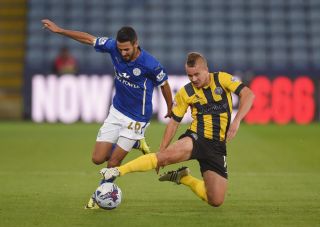 Mangan stepped up seven minutes before half-time to expertly fire home a set-piece from the edge of the box before limping off through injury as the League Two side produced a shock at the King Power Stadium on Tuesday.

Both sides hit the woodwork late on, with substitute David Nugent wasting the home side's best chance on 78 minutes.

The result leaves the Premier League outfit without a competitive victory this season and was an unhappy reunion for Leicester manager Nigel Pearson, who spent six years at Shrewsbury as a player in the 1980s.

Pearson made eight changes from the defeat to Chelsea on Saturday, handing debuts to four players, including his 21-year old son James, who started at right-back.

Leicester nearly took the lead within the first minute, when Chris Wood's deflected pass found its way through to Riyad Mahrez and he forced visiting goalkeeper Jayson Leutwiler into a smart save with a low angled drive.

The visitors had a chance of their own two minutes later, with Leicester's debutant keeper Ben Hamer producing an acrobatic stop to tip over a James Collins header following a well-worked free-kick.

And Hamer was able to breathe a sigh of relief soon after, as Jordan Clark's looping cross eluded everyone before coming back off the bar after 12 minutes.

Shrewsbury continued to trouble their more illustrious hosts as the game approached the 20-minute mark, with first Clark and then Mickey Demetriou firing over from distance.

Marcin Wasilewski should have given Leicester the lead 15 minutes before the break, but his poked effort was parried away by Leutwiler before Wood cannoned a header off the bar two minutes later.

Pearson's men were made to pay for their wastefulness after 38 minutes when Mangan stepped up to curl home a wicked free-kick on the edge of the box after Collins had been fouled by Gary Taylor-Fletcher.

Mangan's night was cut short almost immediately, however, with the 27-year hurting himself during the set-piece.

The visitors should have had a second 12 minutes after the break, but Connor Goldson could not keep his header down after a well-worked corner.

A crowd of just over 8,000 saw Leicester struggle to assert any sort of dominance after the break, despite the introduction of Nugent and Andy King after 63 minutes.

Scott Vernon should have wrapped up the win 15 minutes from time when Collins' long-range effort came back off the post, but fired the rebound of the same upright.

Substitute Nugent then hit the woodwork himself three minutes later following a terrific run from Anthony Knockaert, but the visitors held on to secure their place in the third round for only the second time since 1993.