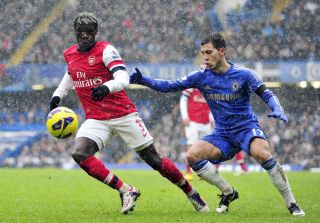 The Premier League table-toppers bounced back from their first loss in more than two months - which came in the UEFA Champions League against Borussia Dortmund - with a 2-0 win at Crystal Palace on Saturday.

Mikel Arteta from the penalty spot and Olivier Giroud scored the goals for Arsenal, who have not lost an away match in any competition since March.

Arteta was later sent off and will miss the Chelsea clash, with the Emirates Stadium outfit keen to reverse a trend that has seen them fail to defeat their London rivals in their last three meetings.

There are still significant injury problems for Arsenal, with Theo Walcott (abdominal), Alex Oxlade-Chamberlain and Abou Diaby (both knee) as well as Lukas Podolski (hamstring) on the sidelines, while Mathieu Flamini (groin) has also been added to that list.

Boss Arsene Wenger has traditionally used the League Cup as a chance to give his younger players a taste of first-team football, but he has promised to pick a side more than capable of winning the match.

"I will rotate against Chelsea, but play with a team that has a good chance to qualify," Wenger said.

German winger Serge Gnabry is likely to be involved from the start for Arsenal, after impressing off the bench at Palace, while fellow youngsters Thomas Eisfeld, Ryo Miyaichi and Isaac Hayden could also feature.

Striker Nicklas Bendtner, defender Thomas Vermaelen and goalkeeper Lukasz Fabianski are likely to provide the experience in Wenger's side.

Arsenal have won the competition twice, their last triumph coming back in 1993, with Wenger yet to win the League Cup with the club, having lost finals in 2007 and 2011.

That 2007 defeat was against Chelsea, as Didier Drogba scored twice to guide his side to a 2-1 come-from-behind victory in Cardiff.

Only two teams – Liverpool and Aston Villa – have won the League Cup more than Chelsea, who have lifted the trophy on four occasions.

Chelsea will also enter the match in good form, with their last-gasp 2-1 win over Manchester City on Sunday lifting them to second in the Premier League table.

Fernando Torres scored the winner in the 90th minute, with the result extending their winning streak in all competitions to five matches.

After making an error in Chelsea's 4-1 win over Cardiff, defender David Luiz has begun the last two matches on the bench and is likely to start for the visitors, who are still without Dutch midfielder Marco van Ginkel due to a serious knee injury.