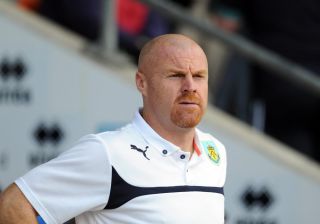 Widely tipped to struggle in the top flight, the sceptics have been proven correct in Burnley's first two games back in the top flight - respective 3-1 and 1-0 defeats to Chelsea and Swansea City.

After being outclassed by Jose Mourinho's side in their opening match, Burnley did at least show improvement at the Liberty Stadium on Saturday and Dyche remains upbeat ahead of the clash with Championship side Wednesday.

"We are a work in progress and we are developing," Dyche said.

"I think we have had a good week in the sense of the challenge that's been placed upon us.

"We have to be encouraged because we've been written off by everyone. We are the only ones who can encourage each other, along with our fans."

Dyche's opposite number Stuart Gray returns to the club where he spent a spell as assistant manager and then caretaker boss.

Gray was appointed as number two to Laws in January 2010 and then took the reins for four matches, of which he won two, when the former Nottingham Forest defender departed later that year.

Wednesday manager Gray has seen his side get off to a strong start in the Championship in his first full season in charge at Hillsborough, with two wins and as many draws from their four matches thus far.

They were convincing winners in the last round of this competition - seeing off League One Notts County 3-0 at home - and Gray will hope the strike duo of Atdhe Nuhiu and Stevie May can continue the goalscoring form that saw Wednesday win 3-2 at Middlesbrough on Saturday.

"Atdhe has started the season really well and the only thing he was missing was more goals because of the chances we've created," he said.

"I'm a big believer that the harder you work, the luckier you get. I'm really pleased for Stevie May, he's a natural goalscorer and this is just the start for him."

Long-term absentee Sam Vokes (knee) is the only man unavailable for Burnley, while for the visitors, Kieran Lee is out with a hip problem and Sam Hutchinson is a doubt after missing the trip to Middlesbrough with a knock.