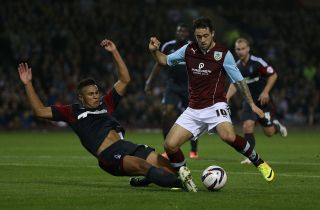 Sean Dyche's men have been the surprise package of the season's opening months in the second tier of English football, and secured their position at the top of the league with a seventh straight win over QPR on Saturday.

The run comes after losing leading striker Charlie Austin in the close-season, but Danny Ings and Sam Vokes have more than filled the void in attack with 12 and eight goals respectively in all competitions.

Ings - who scored both goals in Burnley's 2-0 win over QPR - has netted four times in the League Cup so far, helping Burnley reach the last 16.

And although they have so far been denied the chance to measure their progress against Premier League opposition, they will, no doubt, be relishing the opportunity.

Ex-West Ham winger Junior Stanislas has failed to nail down a regular starting spot in the league this term under Dyche, but has featured in all Burnley's games to set up the meeting with his former club, finding the net in the opening round at York City.

West Ham came off second best against Burnley when the sides shared a division two seasons ago.

Before claiming play-off glory over Blackpool at Wembley, West Ham could only take a solitary point from Burnley – coming back from 2-0 down to scrape a point at Turf Moor having suffered a 2-1 December reverse on their own patch.

Midfielder Kevin Nolan was on target on both those occasions but the West Ham captain has been uncharacteristically quiet in front of goal of late, failing to find the net since rounding off a 2-0 season-opening win over Cardiff City.

The Welsh club also came off second best at Upton Park in round three of the League Cup - twice levelling in a topsy-turvy encounter, only for Ricardo Vaz Te to snatch a 3-2 triumph for Allardyce's men in the 88th minute.

Vaz Te went on to find the net in consecutive Premier League matches against Tottenham and Manchester City, where Allardyce used an unconventional formation without a recognised striker that brought mixed results, as a surprise 3-0 win was followed by a 3-1 defeat.

With England forward Andy Carroll (heel) still around a fortnight shy of a return to action, Burnley may be the latest team to tackle this unusual approach after it drew a blank in the Hammers' goalless draw at Swansea City on Sunday.