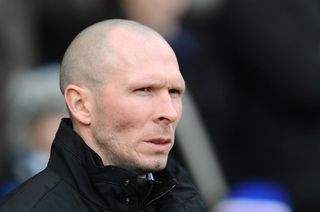 The 38-year-old took over the reins at the Kassam Stadium in July after Gary Waddock paid the price for a dismal end to the 2013-14 campaign.

Appleton's fledgling managerial career has been somewhat nomadic, with a number of ill-fated spells at Football League clubs.

Since taking over from Roberto Di Matteo in a caretaker capacity at West Brom in 2011, Appleton has held brief managerial posts at Portsmouth, Blackpool and Blackburn Rovers.

Now Oxford boss, Appleton has suffered a difficult start to life in League Two as his side have lost all four matches, including a 1-0 reverse at home to former club Portsmouth on Saturday.

The one positive note of the season thus far was the 2-1 win at Bristol City in the first round of the League Cup, as second-half goals from Carlton Morris and Danny Hylton sealed an impressive comeback at Ashton Gate.

Since winning the competition in 1986, Oxford have progressed beyond the fourth round only once and Appleton described Tuesday's clash as "a welcome distraction".

The game will see him face another man feeling his way at a new club in Alan Irvine.

Eyebrows were raised when the Scot was announced as West Brom's new head coach in June, citing Irvine's lack of experience in charge of a Premier League club as a potential stumbling block.

Irvine has led Albion to two draws in the top flight so far, with Saturday's 0-0 stalemate at Southampton coming on the back of a 2-2 draw against Sunderland on the opening day.

And the former Preston North End and Sheffield Wednesday manager believes his side are a work in progress.

"I'm delighted with where the team are at this moment in time," he said. "It's a team that's only been together for the last two weeks.

"Prior to that we had 10 to 11 players who were working on a daily basis with young players. So our meaningful work has only really happened in the last couple of weeks."

It remains to be seen if Irvine decides to hand a debut to new loan signing Silvestre Varela, who completed a move from Porto on Sunday, while former Celtic striker Georgios Samaras could be in line to make a first appearance for the club.

The hosts have doubts over the fitness of centre-back Joleon Lescott and midfielder James Morrison (both knee).

Appleton revealed that Oxford goalkeeper Ryan Clarke (foot) and defender Andy Whing (hip) are ahead of schedule in their recovery from injury, but the duo are not yet ready to return.