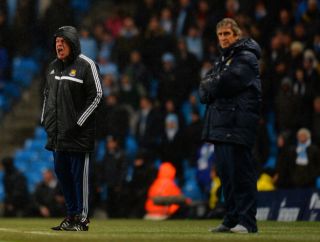 City's thumping first-leg win, which featured a hat-trick from Alvaro Negredo, two Edin Dzeko goals and one from Yaya Toure, has ensured the return meeting at Upton Park is likely to be little more than a formality.

In Manuel Pellegrini's first season at the helm, City have racked up 103 goals in all competitions and go into Tuesday's game in supreme form, boasting 15 wins from a 17-match unbeaten run.

It would take a miracle of epic proportions for Sam Allardyce's Premier League strugglers to turn the tie around and history is not on their side.

West Ham have not defeated City in any competition since a 1-0 win at Upton Park in 2009, which represents their only triumph in the last 16 meetings between the two sides.

Even an unlikely repeat of West Ham's biggest win over City - a 6-1 scoreline achieved twice in the 1962-63 season - would not be enough to see the London club, who have never won the League Cup, through to their third final.

City are two-time winners of the competition, in 1970 and 1976, and are seeking to reach the final for the fourth time.

West Ham will be able to call on the services of captain Kevin Nolan, who has completed a four-match ban following his red card at Fulham on New Year's Day.

James Tomkins is also back from a one-match suspension for his dismissal at Cardiff City, but Allardyce still has a defensive headache.

The manager had to play Matt Taylor at right-back in Saturday's 3-1 defeat against Newcastle United, which saw the club slump back into the relegation zone, because of an injury to George McCartney in the warm-up.

With Guy Demel and Winston Reid still missing, Allardyce's back four will have an unfamiliar look to it, and a visit from free-scoring City is likely to be the last thing the West Ham boss wants.

The home fans will be buoyed by the sight of a fit-again Andy Carroll, who has made appearances off the bench in the last two games and could start on Tuesday.

Pellegrini, meanwhile, has been able to bring Sergio Aguero back into the fold after a four-week lay-off, and the Argentinian has marked his return from a calf problem by coming on as a substitute to score in successive games.

Samir Nasri is definitely out for City, who occupy third spot in the Premier League, after sustaining a knee injury at Newcastle last week.