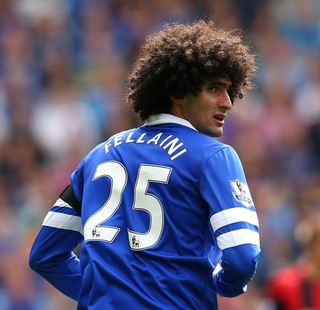 Everton were taken to extra time by League One's Stevenage, with Marouane Fellaini grabbing a crucial strike in the additional period.

Luke Freeman put the League One team ahead in the 35th minute, much to the delight of the travelling fans at Goodison Park.

But they were pegged back on the stroke of half-time, thanks to a debut goal from close-season loan signing Gerard Deulofeu.

The home side missed a host of chances in the second half, with Arouna Kone particularly guilty, and Roberto Martinez's team had to settle for extra time.

And with the match heading for a penalty shootout, Fellaini scored from close range to spare Everton's blushes.

League Two side Morecambe were undone by two late goals, but will be proud of their performance in their 2-0 defeat to Newcastle.

With the game looking like it was heading for extra-time Shola Ameobi popped up with five minutes remaining, much to the relief of manager Alan Pardew.

And they added gloss to the scoreline deep into injury time when Sammy Ameobi made sure of the result at the Globe Arena.

While Newcastle sealed their progression late on, Nottingham Forest required extra time to defeat Millwall 2-1 at the City Ground.

Matt Derbyshire opened the scoring, but they were denied the win in normal time by Liam Feeney who equalised with five minutes remaining.

But Jamal Lascelles grabbed the winner just three minutes into the additional period.

Andreas Weimann calmed any nerves when he opened the scoring after 19 minutes, and it got better shortly before the break when Christian Benteke doubled the advantage.

And any hopes of a Rotherham comeback were killed off by Fabian Delph who netted shortly after the restart.

A Kenwyne Jones hat-trick ensured Mark Hughes' Stoke City side would be in the hat for round three, as they beat Walsall 3-1 at the Britannia Stadium.

They will be joined by Cardiff City, as two goals is many minutes from Nicky Maynard and Rudy Gestede handed Malky Mackay's side a 2-0 success away to Accrington Stanley.

Watford were made to work hard to overcome fellow Championship side Bournemouth, but an Elliott Ward own goal and a Cristian Battocchio chip ensured Gianfranco Zola's team came away with a 2-0 triumph.