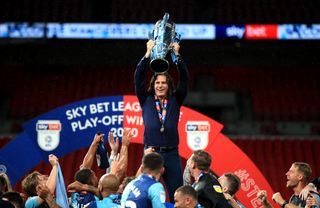 Clubs in League One and Two have voted in favour of squad salary caps, the English Football League has announced.

The cap will be set at £2.5million in League One and £1.5m in League Two and has been introduced with immediate effect, the EFL said.

A statement from the EFL read: “The decision follows extensive and comprehensive consultation with all clubs in respect of addressing sustainability and wage inflation issues across the EFL which were initiated prior to the suspension of football in March following the Covid-19 outbreak and have continued during the course of the summer.”

Players’ union the Professional Footballers’ Association has expressed concerns about the proposals as they are drafted, and has called for further consultation and clarity around the objectives for introducing a cap.

It is understood 22 League Two clubs were in favour of a cap, with two against.

The EFL said the cap would cover basic wages, taxes, bonuses, image rights, agents’ fees and other fees and expenses paid directly or indirectly to all registered players.

Promotion bonuses or incentives payable for success in cup competitions will not be included, the EFL said, and any income generated from players going out on loan is deducted from the club’s salary cap calculation.

“It starts today, which I think is a bit unfortunate because when it was first mooted it was going to start at the end of June.

“We’ve done all our recruitment expecting it would come and then the EFL said it would start at the end of July, and now it starts from today.

“So there has been some big spending in the gap, in anticipation of the cap, but only by a few clubs. We won’t feel the full effect of the cap until next season – not the one coming, the one after.”

Asked whether he expected the PFA to challenge the regulations, he said: “I have heard that they are going to try and stop it, that they think it’s illegal. I think they’re mistaken.

“There are already controls on what clubs can spend – SCMP (salary cost management protocol) – financial fair play-type stuff. The salary cap is just a version of that. The principle is well established in football and I don’t really understand the basis for their claim.”

The regulations include transition arrangements for relegated clubs and take account of deals already agreed.

There will be an ‘overrun tax’ imposed on clubs who exceed the cap by up to five per cent. It is understood the level of penalty is on a sliding scale depending how much of an overspend the club has committed.

Beyond five per cent, clubs will be referred to an independent disciplinary commission.

Sanctioning guidelines are “in place” for the commission to consider, the EFL said.

EFL chief executive David Baldwin said: “The term ‘salary cap’ is an emotive one, creating the impression of a restrictive measure, but we are clear in our view that this is neither the objective nor the likely effect of these changes to EFL regulations.

“The financial impact of Covid-19 will be profound for EFL clubs and today’s vote will help ensure clubs cannot extend themselves to the point that could cause financial instability.”

Championship clubs are understood be discussing a cap, but there are currently no formal plans for a vote on the subject.

It is understood the level of the cap will be index-linked to reflect changes in domestic broadcast revenue.