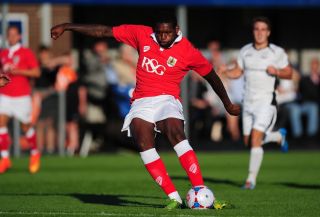 The 23-year-old striker, a product of Arsenal's youth system, stepped up to score his first League One goal of the season in the 95th minute after Luke Freeman had been felled in the area.

County had looked on course for a third straight league victory when Zeli Ismail finished smartly after a great run in the 13th minute.

The hosts held on to their lead until the hour mark, when experienced striker Aaron Wilbraham drew City level with a typical poacher's goal.

And Emmanuel-Thomas, introduced in the 78th minute in place of Kieran Agard, had the final say, as he kept his cool from 12 yards to claim a hard-earned three points for the visitors.

City's win moves them up to third in the table, with Steve Cotterill's side unbeaten in five League One outings this season, while County remain 10th.