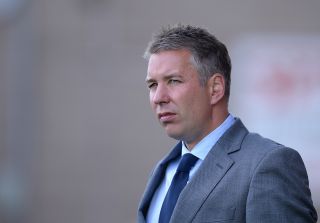 Darren Ferguson's men continued their impressive run with a 1-0 victory over Shrewsbury Town on Saturday to remain within just one point of league leaders Leyton Orient.

They face a managerless Sheffield United, who will be eager to build up momentum after securing their first league win since the opening day of the season at home to Port Vale on Saturday.

Success for the visitors in that fixture would provide a welcome boost for Orient too, who will hope to gain some breathing space at the top of the table when they face Coventry City away from home.

Also willing Peterborough to slip up will be Wolves and Preston North End, who sit in third and fourth, and have the opportunity to close the gap when they take on Oldham Athletic and Bradford City respectively.

However, with much of the top half of the table remaining congested after the opening weeks of the season, wins for both Swindon Town and MK Dons could also see them catapult up the league.

Both will look to capitalise on home advantage on Tuesday, with Swindon out to extend their unbeaten 12-match run in the league at the County Ground against Walsall, while MK Dons play host to Carlisle.

Tuesday's action will also see some of the strugglers aim to improve, with Bristol City hoping for their first win of the season when they play Brentford, who beat Colchester United 3-1 on Saturday.

Notts County and Tranmere Rovers just above Sean O'Driscoll's side have fared marginally better, but they will be desperate to try and kick start their campaigns when they face Gillingham and Rotherham United.

Stevenage could also escape from the bottom four with a win over Crewe Alexandra, though may struggle with Steve Davis' men having continued to put a shaky spell behind them with a 1-0 win over Bristol City at the weekend.

Elsewhere, there are mid-table encounters for Crawley Town and Shrewsbury Town, who will welcome Port Vale and Colchester respectively.