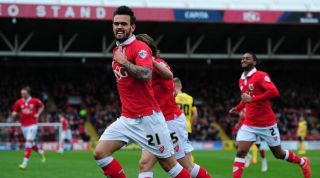 After second-placed Preston North End were held to a 2-2 stalemate at Port Vale in Friday's only fixture, Steve Cotterill's men knew they only needed to claim a point to secure the championship, and they duly delivered.

City hammered Bradford City 6-0 on Tuesday to secure automatic promotion and although they were far from as comfortable against Coventry, it mattered little.

Coventry did cause some problems for goalkeeper Frank Fielding, with Nick Proschwitz seeing his chip superbly saved by the shot-stopper late on, while Aaron Wilbraham went close for the hosts.

Elsewhere, MK Dons closed to within a single point of Preston in the battle for the second automatic promotion spot, beating Leyton Orient 6-1 thanks to an incredible goal spree.

Dons were four up by half-time, all of them coming within 15 minutes, thanks to Dean Bowditch, Will Grigg and two from Rob Hall - the second a superb 25-yard volley.

Hall completed his hat-trick after the break with a curling finish and, while Jay Simpson pulled one back with 21 minutes to go, Tottenham-bound Dele Alli rounded things off nine minutes from time – his 16th of the season.

Towards the other end of the table, Crawley Town lifted themselves out of the drop zone with a potentially crucial 2-0 win over relegation rivals Notts County, while second-from-bottom Colchester United conceded a last-gasp equaliser to draw 2-2 with Scunthorpe United.

Rochdale's slim chances of claiming the final play-off spot all but disappeared, as a 1-0 loss to Gillingham left them eight points adrift of Chesterfield – who drew 0-0 at Oldham – with three games to play.

A 1-0 home defeat to already-relegated Yeovil Town meant Swindon Town were unable to keep the pressure on Preston and MK Dons and, while Sheffield United also failed to win, their 1-1 draw with Bradford City was enough to all but guarantee a play-off spot.

Barnsley and Crewe Alexandra could also only manage 1-1 home draws, as Luke Berry rescued the former with a last-gasp equaliser against Peterborough – who had Kgosi Ntlhe sent off – and Tom Bradshaw saved Walsall at Alexandra Stadium.

The day's other clash saw Doncaster Rovers and Fleetwood Town play out a goalless draw at the Keepmoat Stadium.