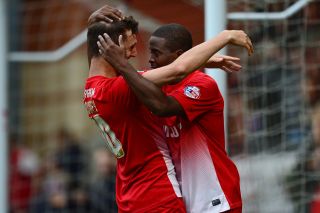 Striker Kevin Lisbie put the visitors in command with a double, before wingers Dean Cox and Shaun Batt made sure of the points after Tranmere's Ian Goodison had been sent-off following a clash with Lisbie.

That was enough to see the visitors stay at the summit, but Peterborough United remain hot on the heels of the leaders after Nathaniel Mendez-Laing's second-half strike gave them a 1-0 win at home to Shrewsbury Town.

The winger's finish 19 minutes into the second half proved to be the difference between the two sides, and keeps Darren Ferguson's men just one point behind Orient.

At the other end of the table, managerless Sheffield United moved out of the bottom four, after they claimed a much-needed win, 2-1 against Port Vale.

The victory was United's first in the league since the opening day of the season and came as midfielder Michael Doyle netted 15 minutes from time after Port Vale defender Adam Yates had cancelled out Neill Collins' opener.

Vale, however, ended with 10 men after Daniel Jones was sent off for a second bookable offence.

Wolves fell short of their fourth consecutive win as they were held 1-1 by near-neighbours Coventry City, substitute Aaron Phillips rescuing a point for the visitors after Leigh Griffiths had given Kenny Jackett's side the lead.

Patrick Bamford's late goal gave MK Dons a 3-2 win over Rotherham United, the striker scoring two minutes from time after a Lee Frecklington strike and an own goal from Tom Flanagan had brought Rotherham - who had Michael O'Connor sent off - level following Shaun Williams' penalty and a close-range strike from Ben Reeves.

Striker Emile Sinclair scored the only goal to earn Crawley Town a 1-0 win over Bradford City, while second-half strikes from Keith Keane and Josh Brownhill were enough to earn Preston North End a 2-1 success at Gillingham.

Bristol City are rooted to the bottom of the league after they were beaten 1-0 at Crewe Alexandra, while Stevenage are still in the relegation zone following their 2-1 defeat at Walsall.