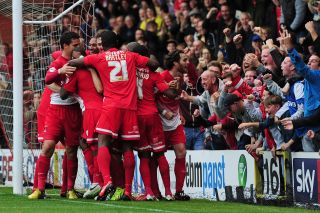 Kevin Lisbie struck with just two minutes remaining at the Matchroom Stadium to give the early pacesetters another victory and take them to 18 points from six games.

Louis Dodds gave the visitors a surprise lead on 21 minutes, but David Mooney scored twice before the break to restore order for Orient.

However, Jennison Myrie-Williams looked to have nicked a point for Micky Adams' men with a 54th-minute equaliser, before ex-Charlton striker Lisbie intervened late on.

Peterborough and Wolves also both won to move onto 16 points apiece and maintain pressure on Orient at the top.

Britt Assombalonga scored twice to help Darren Ferguson's Peterborough to a comfortable 3-0 victory at Bristol City, while Wolves secured their fifth consecutive League One success with a 3-2 win over Swindon Town at Molineux.

Rotherham United remain just a point further back in fourth after Daniel Nardiello completed his hat-trick in injury time to give Steve Evans' side a hard-fought 3-2 home victory over Oldham.

Preston and Milton Keynes Dons fill the final two early-season play-off spots after both picked up three points on Saturday.

Former Bolton striker Kevin Davies rounded off a comprehensive 3-0 Preston win over Stevenage at Deepdale, while MK Dons eased to a 3-1 success at home to struggling Notts County.

Chris Kiwomya's men remain rooted to the foot of the table with just one point from six games, but Carlisle United - who sacked manager Greg Abbot last Monday - moved out of the relegation zone with their first win of the season.

Matty Robson netted a header in the 54th minute to earn the Brunton Park outfit a much-needed three points against struggling Sheffield United.

Nahki Wells kept up his superb run of goalscoring form as his fifth and sixth strikes of the campaign earned Bradford City a 2-2 home draw against Colchester, while Adam Forshaw snatched all three points for Brentford at Tranmere in the most dramatic of circumstances.

Uwe Rosler's men raced into a two-goal lead inside the first 14 minutes at Prenton Park through Martin Taylor and Clayton Donaldson, before Tranmere hit back with strikes from Chris Atkinson and Adam Dugdale.

Donaldson then grabbed his second of the game on 71 minutes to restore the visitors' lead, but Cole Stockton thought he had done enough to earn Ronnie Moore's side a point with a 91st-minute leveller.

However, Forshaw had other ideas as he kept his cool to score from the penalty spot two minutes later after Dugdale had handled in the box to make it 4-3.

Elsewhere, Crawley were held to a 1-1 home draw by Shrewsbury and Walsall eased to a 3-0 victory at Crewe.