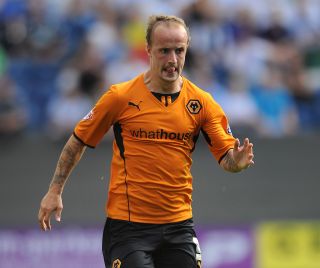 Kenny Jackett's side looked in control in their first-ever meeting with the West Sussex club as Bjorn Sigurdarson netted in the seventh minute with the visitors proving wasteful in front of goal for large parts.

Crawley looked to have snatched a point in the 91st minute, though, Billy Clarke netting via the post from Jamie Proctor's cut-back.

However, the home fans went home happy as Kyle McFadzean was adjudged to have handled Kevin McDonald's cross.

Scotland striker Leigh Griffiths stepped up and calmly dispatched the spot-kick to send the Midlands side top with 10 points from their opening four fixtures.

Carlisle United sealed their first point of the season with a hard-earned 1-1 draw away to Colchester United, who themselves had been eyeing top spot.

Having conceded 13 goals in their opening three games, it was a surprise that the Cumbrians took the lead in just the fourth minute at the Weston Homes Community Stadium.

Matt Robson, who had tested Sam Walker in Colchester's goal with an earlier effort, broke the deadlock early on with a left-footed finish across the goalkeeper.

Colchester peppered the goal as they sought a way back into the game, and were finally rewarded with 20 minutes remaining as Freddie Sears got on the end of Gavin Massey's ball to equalise.

Carlisle climbed to 22nd with the draw, but still have a considerably worse goal difference than the teams around them, who will play on Saturday.