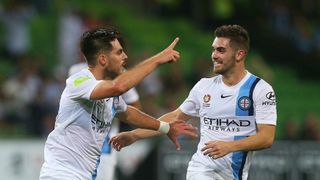 Adelaide United stormed to the top of the A-League table with a 4-0 victory over struggling Wellington Phoenix on Saturday.

Carrusca was the provider once more four minutes before half-time when he picked out Stefan Mauk to crown a clinical United counter-attack.

There was worse to come for the Phoenix early in the second period, as Craig Goodwin squared for Bruce Djite to net his fifth of the season and substitute Pablo Sanchez piled on further misery for Ernie Merrick's second-bottom team in the final minute.

Melbourne City bounced back from a surprise defeat to Wellington last time out by beating Sydney FC 3-0 – Bruno Fornaroli's record-breaking hat-trick keeping them in touch with the leaders.

Fornaroli embarked on a mazy run before smashing home Aaron Mooy's return cross in the 41st minute and he doubled his tally with 19 minutes to play.

In the 82nd minute, City's star striker dispatched a pass from substitute Michael Zullo beyond Sydney goalkeeper Vedran Janjetovic and became  the first A-League player to bring up 20 goals in a season.

Adelaide are a point clear of Western Sydney Wanderers and Brisbane Roar, with Melbourne City three points from the summit.