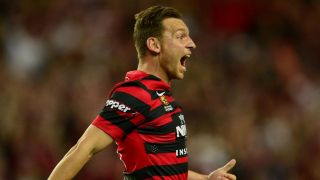 Wanderers had failed to win their last three matches and welcomed a Perth side who had won five on the spin, but the hosts took the lead in the 62nd minute when Romeo Castelen cut in from the left to fire home and complete a rapid counter-attack.

The lead lasted just two minutes, though, as Andy Keogh kept his cool to level from the penalty spot after Chris Harold was hauled to ground by Nikolai Topor-Stanley.

It appeared that the match was heading for a draw, but Wanderers struck with just five minutes remaining as Santalab – on as a 64th-minute substitute – raced onto Mark Bridge's pass and produced an audacious lob over Ante Covic that fell just under the crossbar.

Louis Fenton and Matt Ridenton put the hosts 2-0 up inside 15 minutes and, although Aaron Mooy quickly reduced the arrears, Ernie Merrick's men defended resolutely to earn the three points.