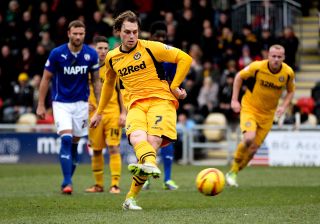 Oxford United's draw at Fleetwood Town on Saturday meant Paul Cook's side would return to the summit with a victory at Rodney Parade, but in-form Newport had other ideas.

Danny Crow put the Welsh side in front when he headed home Robbie Willmott's free-kick after just six minutes, but the visitors equalised just after the hour mark when goalkeeper Lenny Pidgeley failed to deal with a Jay O'Shea cross and Jimmy Ryan tucked home the loose ball.

The game swung back in Newport's favour when defender Liam Cooper was shown a straight red card for a professional foul on Conor Washington 15 minutes from time, and Adam Chapman scored his second goal of the season with the resulting penalty.

Andy Sandell gave Justin Edinburgh's side breathing space when he struck from close range three minutes from time and, although Justin Richards pulled a goal back in stoppage time, the damage had already been done and Newport made it eight League Two games without defeat.

Newport now sit just a point outside the play-off zone, while Chesterfield remain in second place, level on points with three other sides.