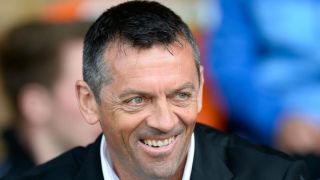 Southend United will look to overcome the disappointment of throwing away automatic promotion when they travel to Stevenage in the League Two play-offs.

Phil Brown's side sat third heading into the final weekend, but a 3-1 defeat at Morecambe left them fifth and allowed Bury to seal a place in League One.

The former Hull City boss takes his side to the Lamex Stadium for Sunday's semi-final first leg desperate to avoid a repeat of last season's play-off heartbreak – when they lost to Burton Albion at the same stage.

"It's a difficult one to swallow getting beat on the last day but we were our own worst enemy – we defended uncharacteristically," he told the club's official website.

"But we have another chance to earn promotion now. We need to relax. We will be tested and we'll need to be strong."

Stevenage are looking to bounce straight back into League One after relegation last season.

Graham Westley's side cemented their play-off place in the final month of the campaign with four wins in their last six games – a return bettered only by Southend in the top seven.

Both Wycombe Wanderers and Plymouth Argyle enter their first leg on the back of three wins in their previous five games, although those runs will be viewed very differently by each club.

Plymouth's run-in was enough to nudge them ahead of Luton Town in the final play-off berth, but Wycombe's results ultimately denied them automatic promotion.

John Sheridan's side are looking for a return to the third tier for the first time in four seasons. Wycombe's absence is only three, but they were nearly out of the football league altogether a year ago.

Both sides come into the game on the back of victories on the final day, with Plymouth defender Peter Hartley confident they can keep their momentum going with victory at Home Park.

"On our day, we're more than capable of beating anyone in the league."