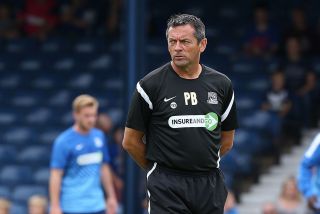 Phil Brown's side go into the game full of confidence having yet to concede a goal in their opening three matches and only behind leaders Oxford United on goal difference.

Chesterfield are also unbeaten, having won two and drawn one, although they failed to beat Southend last season and fell to a 1-0 defeat at the Proact Stadium with Gavin Tomlin getting a late winner.

Oxford welcome Wycombe Wanderers to the Kassam Stadium having scored nine goals in their opening matches.

Deane Smalley and Alfie Potter have both scored twice for Chris Wilder's side and will be hoping to get their first goals at home against a Wycombe side that have struggled so far.

After an opening day win, Gareth Ainsworth has seen his team lose back-to-back games 1-0, and they sit in the bottom half of the early-season table.

Two other teams are looking to protect unbeaten runs going into the fourth weekend of the season - Exeter City and Burton Albion.

Gary Rowett has developed his Burton ranks well during the close-season - including the arrival of Rory Delap - and they have looked strong in their opening matches, despite having lost last season's star player, Jacques Maghoma.

Exeter' have had a strong start to the season and saw John O'Flynn score twice last time out against AFC Wimbledon.

Both sides won their away game in the two clashes last year, by a 3-0 scoreline on both occasions.

Morecambe are one of six teams without a win so far and a tough trip to St James' Park could see the wait for success last a little longer.

Jim Bentley's side have only scored once so far, and the 37-year-old has already used two goalkeepers in his starting line-up as he seeks to determine his strongest XI.

Two other sides without a win meet at the Crown Ground as Accrington Stanley entertain Cheltenham Town.

Stanley found themselves in a relegation battle last season, only improving in the closing stages to ensure their safety.

Justin Edinburgh's Welsh side have adapted well to life in the Football League with two wins on the board already.