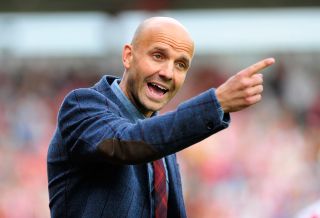 Paul Tisdale's side will go into the match high on confidence after a Liam Sercombe brace helped them thrash Scunthorpe United 4-0 at Glanford Park on Saturday.

The top of the table is incredibly tight with both Chesterfield and Rochdale, on 23 points, leading Exeter on goal difference, while Oxford head a clutch of three teams just behind on 22 points.

Keith Hill's Rochdale, 2-1 winners at Cheltenham Town on Saturday, will be confident of victory as they host Northampton Town, currently in 23rd place having won only one of their last 10 games.

Leaders Chesterfield, meanwhile, host York City, as they seek to rediscover the early-season form that saw them unbeaten in their first eight league games, with seven victories.

Since that run was ended by local rivals Mansfield Town, Paul Cook's men have won just once in five games, including a 2-0 home defeat by Burton Albion on Saturday.

Gary Rowett's Burton will be looking to build on that victory as strugglers Torquay United visit the Pirelli Stadium, a venue where the home side have not won in their last five league games.

Fifth-placed Fleetwood Town, another of the early-season pace setters, have a chance to return to winning ways following defeat at Southend United, with the visit of Brian Laws' Scunthorpe, themselves looking to recover from their loss by Exeter.

Wycombe Wanderers, who head another clutch of three teams sitting three points off the top on 20 points, travel to Fratton Park to take on an improving Portsmouth side who have taken seven points from nine.

Paul Cox's Mansfield, currently behind Wycombe on goal difference in eighth place, will look to arrest their four-game winless slump at Gigg Lane against Bury, themselves without a win in seven.

Accrington Stanley, marooned at the bottom on just four points, will be seeking their first win of the season as they host 20th-placed Bristol Rovers.

Plymouth Argyle host Justin Edinburgh's Newport County as they bid to halt an alarming slump that has seen them lose four and draw two of their last six league games.