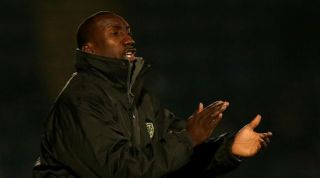 The 21-year old Storey, who saw his loan spell with Newport from Swindon extended until the end of the season earlier in the week, was on hand after 59 minutes to convert Yan Klukowski's cross, condemning Jimmy Floyd Hasselbaink's Burton to a second defeat in a row.

The result sees Newport move into seventh, two points behind fellow play-off hopefuls Bury, who earned a 2-0 win over Plymouth at Home Park.

Burton remain three points clear at the top of the table, after second-placed Shrewsbury Town saw their unbeaten home record come to an end with a 2-1 defeat to Northampton Town.

The visitors were ahead through Chris Hackett's low strike midway through the first half, before Joel Byrom doubled the lead after rifling home from a curled Ricky Holmes free-kick.

Mickey Demetriou headed home late on as the hosts threatened a comeback, but Northampton held on to claim the win and climb to 10th.

A bad day for the top three also saw Wycombe held to a 2-2 draw at home to 10-man Stevenage, leaving Gareth Ainsworth's side just two points clear of Luton Town in fourth, who eased to a 2-0 win at home to Accrington Stanley.

At the other end of the table, Carlisle United slipped into the relegation zone after going down 2-0 at Southend United, while Hartlepool United are now six points from safety after a 1-0 victory over AFC Wimbledon.

Cheltenham Town moved themselves out of the bottom two with a precious 2-0 win at home to fellow strugglers Tranmere Rovers.

There was no such joy for York City however, with only goal difference keeping them out of the relegation places after a 0-0 draw at home to Exeter City, leaving last season's play-off semi-finalists with just one win in their last 10 games.

In the day's other games, Mansfield beat Dagenham and Redbridge 2-1, Cambridge United earned a 2-0 win at Morecambe, while Portsmouth and Oxford United played out a goalless draw.