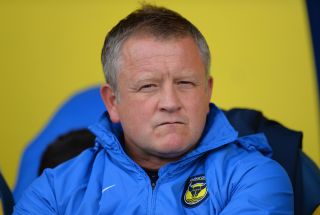 James Constable struck just six minutes in to send them on their way to victory and a Deane Smalley penalty eight minutes from time wrapped up the three points for the visitors.

The result leaves Wimbledon mid-table after 14 matches, while Oxford go top, ahead of Rochdale on goal difference.

Rochdale missed the chance to make first place their own as they were beaten 3-1 at Dagenham and Redbridge, with Medy Elito scoring twice for the hosts.

Wayne Burnett's side moved up to eighth with that win, but only six points separate Oxford at the top and Southend United in 13th.

Fleetwood Town ended a run of three matches without a win as they beat York City 2-0 at Bootham Crescent to move into third.

Gareth Evans and Jamille Matt scored the visitors' goals as York continue to slide down the table having lost two and drawn one of their previous three league matches.

Fleetwood moved above Chesterfield whose winless run was extended to six as they played out a 0-0 stalemate at Bristol Rovers.

Despite only drawing, they occupy fourth place going into the midweek round of matches, while Rovers sit in 21st.

Burton Albion moved up to sixth thanks to a 1-0 victory at fellow promotion chasers Exeter City.

Gary Rowett's side did leave it late to secure the win, however, as Phil Edwards found the net two minutes from time to move level on points with Exeter, but the hosts remain above them on goal difference.

The teams looked as though they would go into the break with the score 1-1, but Andrew Hughes scored in stoppage time before Ismail Yakubu completed the scoring eight minutes after the break.

Northampton Town passed up the opportunity to move out of the relegation zone as they drew 1-1 at home to Cheltenham Town, while last-placed Accrington Stanley picked up a second consecutive win as they beat Morecambe 2-1 on the road.

Plymouth Argyle opened up a five-point gap between themselves and the bottom two as they triumphed 1-0 at Mansfield Town, but Torquay United remain in a precarious position as a 1-1 draw with Portsmouth leaves them in 22nd.

Bury picked up their first win since August 31 as William Edjenguele scored in the 87th minute to beat Wycombe Wanderers 2-1 and Scunthorpe United defeated Hartlepool United 1-0 at Glanford Park.