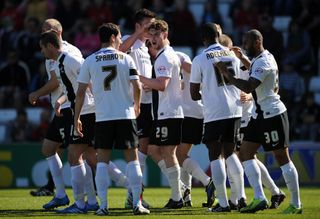 The visitors to the Globe Arena moved ahead after 22 minutes through Sam Winnall, but Jack Sampson struck deep into injury time for Morecambe.

However, a point was enough to keep Scunthorpe in pole position on a day when none of the top three were able to secure maximum points.

Ten-man Chesterfield needed an Eoin Doyle penalty 12 minutes from time to secure a point against Exeter City, while Rochdale were hammered 3-0 by Southend United at Spotland.

Fleetwood Town were therefore able to make up ground on the automatic promotion places and also guarantee at least a play-off spot with a 2-1 away victory over Cheltenham Town.

Graham Alexander's men came from a goal down thanks to efforts from Antoni Sarcevic and Josh Morris, meaning they now sit just three points behind Chesterfield and Rochdale.

At the bottom, Torquay United edged ever closer to relegation with another defeat, this time to Dagenham and Redbridge.

Chris Hargreaves' men look all but certain to drop out of the Football League and are now eight points from safety with three games to play following a 1-0 loss.

Fellow strugglers Wycombe Wanderers and Northampton Town played out a draw at Adams Park - a result that does little for either as they bid to avoid the drop.

Both sides are level on points with Bristol Rovers, who face Portsmouth on Saturday.

Michael Coulson's penalty handed York City a hugely important win in their race for the play-offs as they overcame Oxford United, who slip to eighth, while Plymouth Argyle's top-seven hopes were severely dented with a comprehensive 4-0 loss at Bury.

Accrington Stanley and AFC Wimbledon were held by Mansfield Town and Newport County respectively, with the latter surrendering a two-goal lead at Kingsmeadow.