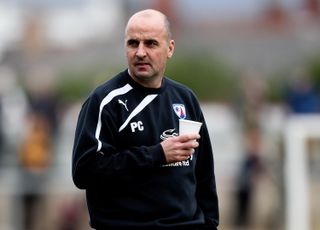 Paul Cook's Chesterfield headed into their encounter with Dagenham at the Proact Stadium as favourites, but were handed a blow in the first half when Sam Hird received his marching orders eight minutes before the break.

However, the home fans were on their feet celebrating the opener on 49 minutes when Marc Richards converted from the penalty spot, after Brian Saah was adjudged to have handled in the area.

Chesterfield's lead did not last long, though, as Dagenham equalised from Abu Ogogo's effort into the top right-hand corner on 58 minutes.

Scunthorpe joined Cook's side on 41 points after a 2-0 success at fellow title hopefuls Oxford United, who suffered their second consecutive home defeat.

Deon Burton headed home Marcus Williams' cross for his fourth goal in as many games to put the hosts ahead on 11 minutes, before Russ Wilcox's men were assured the points with 18 minutes remaining through David Syers' effort.

And there would three teams level on points by the end of Sunday's action, as Burton extended their undefeated league run to seven matches with a 1-0 triumph over Newport County.

After a goalless first half, the deadlock was finally broken on 79 minutes by Billy Kee.

Meanwhile, promotion hopefuls Southend United were held to a 1-1 draw at Accrington Stanley, while the same scoreline settled the fixture between AFC Wimbledon and Plymouth Argyle.

Rochdale sit one point adrift of the summit, as second-half goals from Scott Hogan and Graham Cummins earned a 2-0 triumph over lowly Bristol Rovers.

At the other end of the table, bottom-placed Northampton Town secured a point in a 0-0 stalemate at Portsmouth, while fellow strugglers Torquay United were brushed aside 3-1 at home by Exeter City.

Hartlepool United ended a run of five away games without a victory with their 2-1 success in their clash with Morecambe.

Strugglers Mansfield Town secured a vital three points in a 2-1 win at Cheltenham Town, while the encounter between Wycombe Wanderers and Fleetwood Town was postponed due to a frozen pitch at Adams Park.