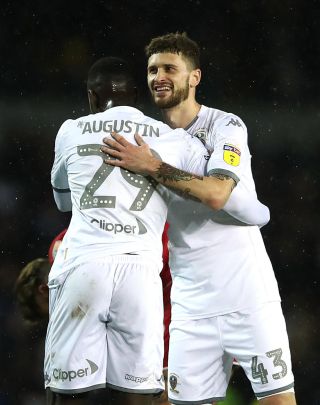 Leeds have a five-point cushion to third place in the Sky Bet Championship’s race for automatic promotion after beating Middlesbrough 1-0 at the Riverside Stadium.

Boro’s relegation worries intensified courtesy of this result, which was never in too much doubt once Mateusz Klich had struck his fourth league goal of the season – three of which have been against the Teessiders – on the stroke of half-time.

Middlesbrough had their moments without ever seriously testing the visitors’ goalkeeper Kiko Casilla, although they did hit the frame of the goal.

Leeds could have scored more before and after the restart but had to make do with the one – even if Middlesbrough did press themselves.

Leeds had reignited their promotion surge before heading to the Riverside by claiming seven points from the previous nine available to them after losing to Nottingham Forest.

In stark contrast Middlesbrough, without a win or a clean sheet since New Year’s Day, had seen the threat of relegation return, and Jonathan Woodgate made three changes to the side who lost at Barnsley.

Marcus Tavernier, Hayden Coulson and Adam Clayton were all brought back into the team and there was a change to four at the back in the hope of shoring up a leaky backline.

But after a bright start from Middlesbrough, Leeds still managed to create the best of the early chances and should have scored from it.

When defender Luke Ayling sent in a delivery from the right, former Boro man Patrick Bamford was left in acres of space eight yards from goal to nod down but his effort was straight at goalkeeper Aynsley Pears.

Bamford went close again when he turned Jack Harrison’s low cross wide of the near post, in what proved to be an end-to-end opening half hour in which Lewis Wing also rolled an effort wide from Ashley Fletcher’s pass.

Pears was also asked to make a strong save low to his left to deny Stuart Dallas and then an even better one to turn away Harrison’s low half volley that looked like it would curl inside his far corner.

But there was no stopping the opener on the stroke of half-time. After Pablo Hernandez had struck the foot of a post with an effort, he then turned provider with the rebound for Klich to hammer powerfully and low inside Pears’ far corner.

It was a busy night for Pears, who also had to make a stunning one-handed save to deny Hernandez from 22 yards. That was moments after Casilla at the other end had tipped over a George Saville thunderbolt from marginally further out.

But Middlesbrough kept plugging away and Tavernier shaved the top of the crossbar. He also had another effort saved by Casilla after Wing’s initial free-kick had been blocked.

After that Leeds showed too much to see the game out and leave the 4,700 away fans dreaming of a return to the Premier League.