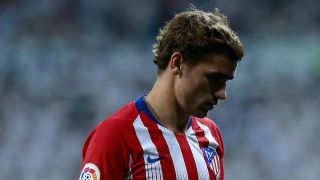 Guido Carrillo's late equaliser prevented Atletico Madrid from going top of LaLiga as Leganes held their underwhelming visitors to a 1-1 draw on Saturday.

Diego Simeone was missing Diego Godin, Koke and Diego Costa due to muscular problems for the short trip to Butarque, and without them their performance was disappointing and Carrillo pegged them back late on.

In an unremarkable first period, Leganes looked the slightly more promising and did at least go close on a couple of occasions, though quality was lacking from both sides.

Atletico improved slightly after the break and eventually went ahead through Antoine Griezmann's free-kick, but substitute Carrillo secured the strugglers a deserved point eight minutes from time with his third goal of the season.

After a tight opening Leganes should have taken the lead 21 minutes in, but Youssef En-Nesyri headed a corner delivery just over from about nine yards.

Recio then went close with a 25-yard free-kick which curled just wide of the left-hand post a few minutes later.

But the fiercely contested first half produced few other highlights at either end.

Ivan Cuellar had to be alert just after the break, racing out to pounce on the ball at the feet of Gelson Martins – making his first LaLiga start since joining from Sporting CP.

But Cuellar was poor for Atletico's breakthrough, as he failed to dive for Griezmann's 30-yard free-kick and watched as it hit the net.

Atletico could not hold on, however, and Leganes got an arguably justifiable equaliser in the 82nd minute – Carrillo tapping in from close range after Rodri Tarin's effort came back off the crossbar.

Griezmann should have restored their lead in stoppage time, but he fired over from Filipe Luis' cut-back and Atletico were consigned to stalemate.

What does it mean? Atletico performances catching up with them

Atletico have not been impressive in recent weeks, with the 2-0 win over Real Sociedad last time in LaLiga glossing over an unconvincing display. They had no such fortune this time, as they failed to control proceedings and stuttered against relegation-threatened opposition.

Rodrigo one of few positives

The signing of Rodrigo from Villarreal always looked as though it was going to be a fine piece of business and he showed why on Saturday, injecting a little composure to midfield when others were rather more panicked.

A difficult outing for Gelson

In fairness to new signing Gelson, he was played in an unfamiliar central role. Even still, he failed to do the simple things well and showed few signs of understanding with Griezmann.