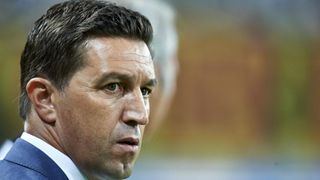 Legia Warsaw have sacked head coach Besnik Hasi after a poor start to the defence of their Ekstraklasa title and the humiliation of a Champions League thrashing at home.

Legia won the league last term under Stanislav Cherchesov, who left the club in the off-season to succeed Leonid Slutsky as head coach of Russia's national team.

Hasi took over at Stadion Miejski, but has managed just two wins from nine league games and oversaw a humiliating 6-0 defeat to Borussia Dortmund last week.

The 44-year-old has paid for those poor results with his job, lasting a little over three months in charge.

"Besnik Hasi was removed from his duties as manager of the first team of Legia Warsaw," the club said in a statement.

"On Monday, Aleksandar Vukovic - assistant manager until now - is going to temporarily take charge of the first team."

Legia's next match is away to Wisla Krakow on Friday, followed a visit to Sporting CP in the Champions League.