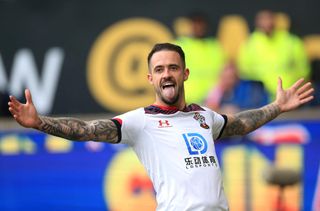 Leicester boss Brendan Rodgers is wary of the threat posed by a rejuvenated Danny Ings as his side prepare to face Southampton on Friday night.

The 27-year-old is a player Rodgers knows well, having signed the striker during his time as Liverpool manager.

A series of injury problems meant things did not work out for Ings at Anfield but he seems to have rediscovered his best form with Saints.

Seven goals in 25 games while on loan at St Mary’s last season persuaded Southampton to pay a reported fee of £20miilion to sign him on a permanent deal this summer and Ings has scored six goals for the club already this campaign, with five of those coming in his last four matches.

“He’s a very good player, Danny. I signed him for Liverpool so I know his qualities,” said Rodgers.

“He wants to run in behind and he’s a very good finisher when he gets in. He wants to score and he scores different types of goals. He will be a threat for them on Friday.

“It’s been unfortunate for him that he hasn’t been able to stay fit, so it’s really nice to see that he has got that clean bill of health now. He has had a number of injuries in his career and it really shows you how strong he is. What Danny has is a great mentality.

“But now he’s been able to play and get regular game-time. He can really focus on his game now and once he does that, gets a regular run of games, he will show that he can always score goals.

Victory on Friday night would see Leicester move above Manchester City into second place in the Premier League table, with Pep Guardiola’s side not playing until Saturday afternoon.

However, Rodgers is not getting carried away by the Foxes’ flying start to the season.

“We can’t forget what our objective was at the beginning of the season, that’s why we don’t get carried away with it,” he said.

“We’re nine games in, we’ve made a very good start and since we’ve worked together in February, the players have accumulated a lot of points and performed very well.

“We’re at the beginning of where we want to go to and it’s a very long season and there are a lot of very good teams in the league.”

Midfielder James Maddison will be fit to plat at St Mary’s, giving Rodgers a full squad to choose from.