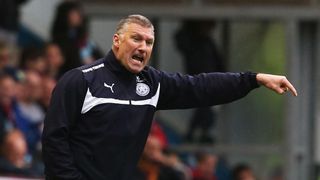 Many pundits had consigned Leicester to relegation with the Midlands club rooted to the bottom of the table after winning just four of their opening 29 matches.

However, a run of five wins from their past six matches - including a comprehensive 3-0 beating of Newcastle United last weekend - has lifted Leicester up to 16th.

Leicester still have to play fellow strugglers Sunderland - who are just one point shy of Leicester in 18th - and QPR as they battle to avoid an immediate return to the Championship.

And former Southampton boss Pearson warned his team that the job is by no means done.

"Bearing in mind who our remaining games are against, I'm not sure that one more win will be enough.

"I'm very pleased with how we've played, but there's a lot of hard work left. It's not done. Not at all. Of course it helps when things go your way elsewhere, but you can't bank on that. We can't leave the field with regrets."

Shane Long scored twice as Leicester, who welcome back David Nugent from a calf injury this weekend but are without Andy King (knock), were on the receiving end of a 2-0 defeat in the reverse fixture at St Mary's in November.

Ronald Koeman's side have been challengers for European football for the majority of the campaign, and the south-coast club remain in contention for a Europa League spot.

But they have won just once in their last five games and slumped to a 2-1 defeat at Sunderland last weekend, so Koeman has urged his side to ensure their season does not end in disappointment.

"I’m not so happy about the last few weeks. I think we have to give a good reaction to the poor game what we showed last week because we played very poor football," he said.

"It's a different team [to] when we met Leicester at home. I think they are on a great run in the past few weeks and full of confidence. [But] If we look and see we have the possibility to reach European football you don't, in my opinion, need more motivation."

Koeman confirmed that midfielder Morgan Schneiderlin is not fit enough to return from a knee injury, while James Ward-Prowse is suspended after his dismissal at Sunderland.