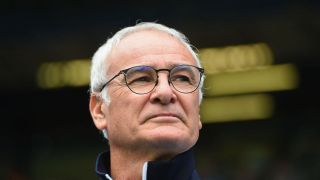 Claudio Ranieri hopes the heroics of 2014-15 will not be required again as last season's Premier League escape artists, Leicester City and Sunderland, prepare to meet on the opening day.

The amiable Italian will return to a Premier League dug-out for the first time since 2004, having replaced Nigel Pearson at the King Power Stadium.

His first opponent is Dick Advocaat, who led Sunderland to safety in the final stages of last term as Pearson's Leicester produced an incredible run to vault out of the bottom three in astonishing fashion.

Despite being new to the job, Ranieri is among many bookmakers' favourites to be the first boss sacked in the Premier League this season, but the 63-year-old is paying little attention to that as he prepares to get going on home soil.

"Managers are under pressure every hour. I am an older man, I am used to the pressure. I also have pressure when I am at home," he said.

"When I am at home I am under pressure from my wife. I prefer to stay with you! When I don't have a job, I am very nervous.

"I love English football because it has my character, I am a fighter. I want to fight for every match. In England everybody wants to fight against everybody.

"I don't want to impress [the supporters], I would like my players to impress the fans and win for them. I heard last season how much they pushed the team. That is good.

"They must continue, not now, but a difficult moment will arrive this season."

Nicknamed 'the Tinker Man' during his time at Chelsea, Ranieri has made minimal surgery to last season's Leicester squad, adding N'Golo Kante and Yohan Benalouane, while Christian Fuchs and Shinji Okazaki were signed before his arrival.

Ranieri has a near fully fit squad to choose from, only long-term absentee Matty James is unavailable – with captain Wes Morgan set to play despite a busy close-season helping Jamaica to the Gold Cup final.

With many of the Leicester players having ended last season with a 22-point burst – a tally greater than any other side managed in the final nine games – Ranieri may be wary of tinkering too much in the hunt for vital momentum.

Sunderland made a stuttering start to last season under Gus Poyet, drawing five of their opening league six games, and they played out two goalless draws with Leicester last term.

Advocaat's first priority has been to shore up his side with the signings of Younes Kaboul and Yann M'Vila, while Netherlands winger Jeremain Lens has impressed in pre-season with some direct attacking displays.

That trio are likely to make their debuts on Saturday, with Jordi Gomez (knee) set to be the only player unavailable to Advocaat.