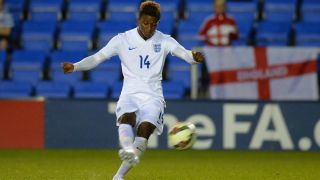 The England Under-20 international will head to the King Power Stadium for an undisclosed fee pending approval from the Premier League.

Speaking to Leicester's official website after securing his move, 19-year-old Gray said: "It's been my dream to play in the Premier League since I started playing football so I'm very happy to join the club.

"It's a great club. The facilities are great and for a player like me it's an ideal place for me to improve. Meeting all the staff here, it seems like a nice family place, so I think that's perfect for me.

"You can see how well the team has been doing this year and I watch a lot of football so I can see that the way Leicester City play suits my style.

"I only hear good things about Leicester and I'm looking forward to starting."

The Birmingham youth academy product was named the club's best young player of last season and had been ever-present in the Championship this term prior to missing the weekend win over Brentford.

Gray will join Leicester's first-team training session on Thursday and could make his debut in the FA Cup clash with Tottenham on Sunday.