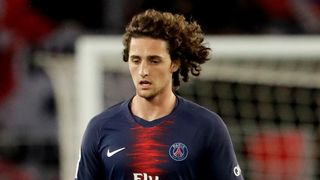 The Paris Saint-Germain midfielder has been linked with Barca as Ernesto Valverde's men prepare for the 2018-19 season.

Rabiot rejected the chance to be on the reserve list for France, with Les Bleus going on to reach the World Cup final final without him.

Nevertheless, Lenglet believes Rabiot would be a good fit for Barca, who were previously linked with his PSG team-mate Marco Verratti.

"Of course," Lenglet told reporters when asked if he wanted Barca to sign Rabiot.

"He's a really good player and Barca always want the best players in the world - and ambitious young players always want to grow and win titles.

"I would love to play with him. I know him well and he's a friend of mine."

Lenglet signed a five-year deal with Barcelona after the LaLiga champions paid his €35.9million release clause to Sevilla.

Manchester United were among the other clubs reportedly interested in Lenglet, whose heart was set on Barca despite strong competition for places.

"I chose Barcelona because, for me, they're the biggest club [in the world] and they play in Spain, which is the best league in the world," Lenglet added. "I want to win trophies and I think I am at the best possible club to do that.

"Of course, I also want to play, because a player that doesn't play isn't always happy. I am here to learn, to play minutes and to win titles.

"Like all players, I want to play as much as possible. I know I am at a big club with a lot of competition in my position but I am going to do all I can to be on the pitch every game.

"I am ambitious but also respectful. There are really good players here and I will learn from them on the training ground and in matches - whether I'm playing or not.