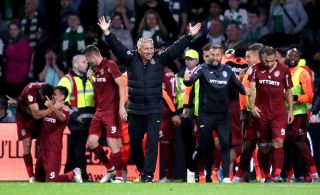 Celtic manager Neil Lennon welcomed the swift chance to avenge their defeat by Cluj after being paired with the Romanian champions in the Europa League.

Cluj triumphed 4-3 at Parkhead this month to knock Celtic out of the Champions League before dropping into the second-tier competition after a 2-0 aggregate defeat by Slavia Prague.

Celtic will also face other familiar opponents in Rennes, who drew 0-0 in a Parkhead friendly last month, while Lennon is looking forward to taking on top seeds Lazio.

“It’s a great draw,” Lennon said. “There’s a couple of glamour games there and obviously a chance to maybe exact some sort of retribution to Cluj as well.

“I think that would be the first thing that came into the players’ heads and obviously, looking at Lazio and Rennes, they will be thinking they can have a real go at both those teams as well.”

Lennon added: “They are a good side. They won the cup last season, which is no mean feat beating PSG in the final. They have some very talented, quick players.

“We played them before in the Europa League and had a couple of positive results against them so I’m hoping for more of the same.

“And of course Lazio is a great draw, very glamorous and a trip to Rome as well. That’s something everyone here will look forward to.”

Celtic answered some of their critics following their Champions League loss by beating Swedish champions AIK 6-1 on aggregate to make the groups.

“We are delighted to be in there and delighted with the group as well, and a lot of big games to look forward to, which is exactly what we want,” Lennon said.

“I think we have the makings of a good side. I’m not going to make predictions but I think we can make a good impact on the group.”

Celtic open their campaign against Rennes in France on September 19 and face a double header against Lazio midway through.

Meanwhile, Lennon declined to comment on half-time clashes between police and supporters in the Celtic end in Stockholm on Thursday night.

Footage showed a policeman drawing his baton against one fan before other officers joined in with the weapons to force supporters back towards a fence.

A Celtic spokesperson said after the game: “We are aware that a number of Swedish supporters entered the area for visiting fans and we are currently investigating events.”