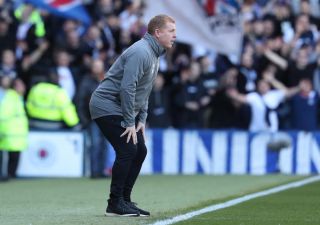 The Hoops clinched their eighth successive Ladbrokes Premiership title the previous weekend at Aberdeen but were second best against their city rivals.

Gers skipper James Tavernier opened the scoring inside two minutes when his free-kick sped past everyone including Parkhead keeper Scott Bain and midfielder Scott Arfield added a second after the break.

It was Celtic’s first domestic defeat of 2019 and Lennon’s first since he took over in February until the end of the season following the sudden departure of Brendan Rodgers to Leicester.

The champions will be presented with the Premiership trophy against Hearts next Sunday before taking on the Jambos again at Hampden on May 25 and Lennon wants his players to pick themselves up.

The former Parkhead captain admitted his side  lacked “energy and quality” at Ibrox and is looking for a reaction.

The likes of Scott Sinclair, Olivier Ntcham, Nir Bitton and Filip Benkovic started on the bench at Ibrox while Kieran Tierney and James Forrest sat out through injury and Lennon has options for the final two matches of the season.

He told Celtic TV: “We have another big game looming in two weeks’ time and I was disappointed with the level of performance. We got what we deserved.

“There are places up for grabs in the cup final, there is no question of that.

“Obviously we want to finish off the season with a win on trophy day and look forward to the cup final because that’s a huge game for us in terms of winning the treble.”

Lennon might have to do without Sweden right-back Mikael Lustig, who came off just before the interval against Rangers with a recurrence of a hamstring complaint.

Lennon said: “It’s the hamstring he pulled last week so, again, we will have to wait and see what the damage is.”

Scotland winger Forrest missed the game with a calf strain but should be fit for Hampden.

Left-back Tierney, who will have an operation on a double hernia at the end of the season, was also absent for the trip to Ibrox and will be managed over the final two matches.