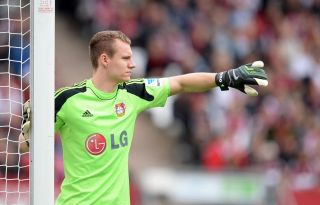 Leverkusen missed the chance to open up a three-point lead over Wolfsburg, who were held to a 2-2 stalemate by Freiburg earlier in the day, in the race for the final UEFA Champions League spot as Dortmund twice came from behind to claim a point.

Lars Bender opened the scoring for Leverkusen at the BayArena after seven minutes before Dortmund's Oliver Kirch levelled just before the half-hour mark.

Gonzalo Castro restored the hosts' advantage in the 35th minute, only for Marco Reus to respond again for Dortmund from the penalty spot.

But, despite twice failing to hold on to a lead, Leno was still pleased with the performance, and has urged his team-mates to sustain that level of performance for the final two games of the Bundesliga campaign.

"I think this was the best performance of the second half of the season. I wasn't expecting it," Leno said.

"We've been short on confidence in recent weeks, so today's performance was exceptional.

"Fourth place is the minimum requirement for us. We have to make sure we win the last two matches."

Dortmund's Kevin Grosskreutz, meanwhile, insisted that Jurgen Klopp's men - who have already made sure of second place - will not relax despite having little left to play for.

"It was a very intense game and I think a draw was a fair result. It was a great game for the fans," Grosskreutz said.

"We're never going to take our foot off the pedal, even if we've already qualified for Europe. Why should we?"