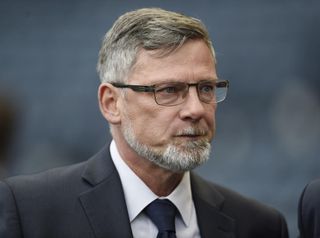 Levein’s patience finally snapped on Saturday following the 1-0 defeat against Kilmarnock as he questioned their ability to handle the pressure of performing at Tynecastle.

A first-half strike by Chris Burke was enough to condemn the Jambos to defeat and send them to ninth spot in the Ladbrokes Premiership, leaving Levein fuming.

The former Scotland boss said: “The feeling is anger for me. I look at the stats and we’ve probably got more possession, chances and all that but that’s not what it’s about. It’s about having the balls to dig deep when we need it.

“Everybody was waiting on somebody else being the one who changed the game. Did they try? Arguably. Did they try hard enough? Absolutely not.

“When it’s difficult and the supporters are on your back you need balls. Too many of the players felt sorry for themselves. You could tell with their body language and that’s the bit that makes me angry.”

Hearts’ lengthy injury list is expected to ease after the international break, with Steven Naismith, Peter Haring, Uche Ikpeazu and Jamie Walker among those who are due back either immediately or soon after the hiatus.

Levein added: “We’ve got some light at the end of the tunnel with players coming back from injuries.

“My point to the players today was ‘don’t come knocking on my door if you’re not selected in the upcoming matches’.”

Angelo Alessio believes there is “no limit” to Kilmarnock’s progress after they surged into the top six for the first time this season.

The Ayrshire outfit have won three of their last five Premiership fixtures, while – aside from a 3-1 defeat at Celtic a fortnight ago – they have not conceded a goal since George Oakley’s strike in Hamilton’s 2-0 win on August 10.

And as Alessio finds his feet in Scottish football following a testing start to his tenure, the Italian boss has vowed to keep pushing his charges.

The former Juventus and Chelsea coach said: “I am happy because we deserved this result and it is not easy to win at this stadium. I think we played well, especially in the first half.

“That’s what we work for but it’s important to have no limits. We are all pushing for the highest position.”